Another Fictional Character Based On TikiTender? 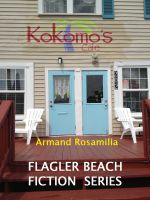 Just finished “Kokomo’s Cafe“, the first in a new series by Armand Rosamilia, based in Flagler Beach.   This Andrew “Woody” Woodson seems like a familiar character.

“Woody seemed to know everyone in Kokomo’s Café, nodding and acknowledging everyone by name. He was the main bartender at the Golden Lion, having run the tiki bar for the past six years. Woody knew everyone in town, and everyone knew him. He was the local celebrity, with his quick smile and flirty attitude toward anything female. Woody played the part and he played it well. Mac thought it must be exhausting to have to play the part twenty-four-seven. You couldn’t step outside your front door without having to play a character, a bigger than life version of who you really were.”

Yes, another character based on the persona of “TikiTender”.   Looking forward to seeing what sort of mis-adventures I (he) gets into in the rest of the series!

Armand Rosamilia is a local author who mainly writes zombie fiction.  You might recall the character “Tiki” in Dying Days: The Siege Of European Village earlier this year.  He has observed so many characters while writing in Flagler Beach, he decided to start the Flagler Beach Fiction series.   Check him out!

Photo Post Seems like so long ago that I had a full beard, even though it was only a few days ago. #tikitender #tikibar

It’s the first day of summer!   Enjoy some tasty, yet easy to make, cocktails this weekend!

Tonight I will broadcasting live in my debut Sunday Night Ska show for the all new Surf 1700 AM in Flagler Beach, broadcasting online via flaglerbeachradio.com.    Sunday Night Ska with TikiTender is set to broadcast from 8pm-10pm Eastern every Sunday night.  True to form, the show will be part music and part history lesson as I take the listeners on a musical journey from the beginnings of ska in late 1950s Jamaica, to the 2-Tone Revival in England in the late 1970s, to Third Wave Revival in the late 80s  to mid 90s.

Tonight’s show will include the following artists:

I want the show to be interactive so feel free to send me a message one of the dozens of platforms on which I can be reached.   Instant requests will be limited due to time, but I will do my best to work them in to upcoming shows.    Let’s get ready to skank!

Who’s That In The Palm Coast Observer?

Shanna Fortier is everywhere.  As community editor for the Palm Coast Observer, she can be seen taking photos at events all over the county.  In addition, via a column called Shanna’s Kitchen, she writes about food and (on occasion) drink.  When she asked if I would talk to her about summer cocktails I demured at first, because everyone knows I hate being in the spotlight.  (/end sarcasm>

Shanna was kind enough to make me sound pretty cool and also give a mention to Fun Coast Bartending.

“In 2012, Woods launched Fun Coast Bartending, a bartending company he uses for private events, weddings, chamber functions and most impressive of all, the 2013 Rock ‘n’ Rib Fest.”

Look for me in today’s Observer or click over to read the entire article here: http://www.palmcoastobserver.com/blog/Shannas-Kitchen/Tikitender-Bring-back-the-Tom-Collins/9-554

Most of you know I launched my own event bartending company, Fun Coast Bartending, last year.  Help me get the word out by voting in the Daytona News Journal’s “Best Around” awards.  Since “Bartending Service” isn’t a category, we’re asking you to write us in under “Caterer”. I  appreciate the few minutes of your time it will take to vote. Thanks again! http://creative.news-journalonline.com/ads/readerschoice/news-tribune-ballot.htm

Join TikiTender for a night of pampering! UPDATE: THIS EVENT HAS BEEN CANCELLED